At the end of a dance class or long Milonga, who hasn't at one time or another felt their feet starting to complain? If you are as interested as we are in learning more about how to keep dancing strong and for a long time, you may enjoy watching Active-Isolated Strength Training.

How peaceful is your world? Do you have a peaceful inner life? Learning how to be focused in the present moment, is one of the lessons we need to learn in Tango to be good followers. Learning how to stop the internal mind chatter and allowing ourselves to simply be present to our partner. It's not easy, our minds are so busy full of thinking noise; imagined conversations, plans, remembering, worrying, obsessing, wondering...

Email ThisBlogThis!Share to TwitterShare to FacebookShare to Pinterest
Labels: International Day of Peace 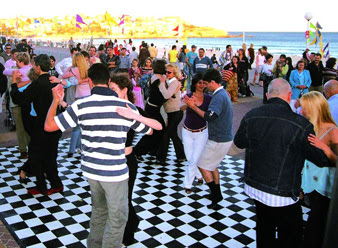 Esquina de Tango are hosting a FREE Outdoor Milonga and Beginners Tango Workshop as part of the Festival of the Winds programme. Experienced tango dancers are welcome to assist in the Beginners Tango workshop.

The Milonga will close the Festival. For a program detailing the day's activities visit: Waverly.nsw.gov.au things to do 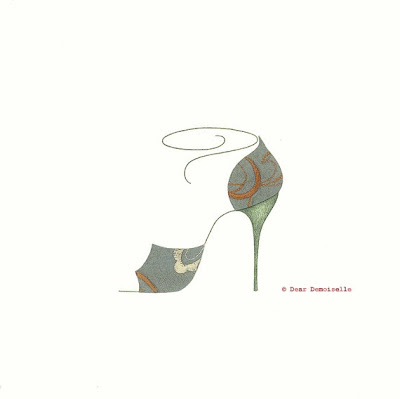 Stumbled across this lovely Tango Shoe - Art by Trud at DearDemoiselle all the way from Oslo Norway. You can buy it or another similar beauty at the DearDemoiselle Etsy Shop. I wish I could buy a pair to dance in.

I discovered this gorgeous shoe via Trud's blog: Tango Immigrant

Tango and Art - Our favourite combination 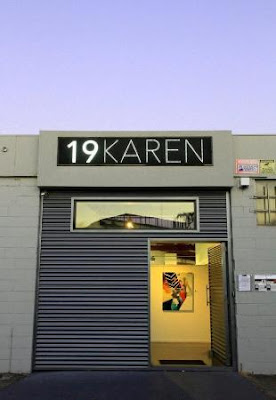 19 Karen Contemporary Artspace is dedicated to discovering cutting edge emerging and established contemporary Australian and international artists with exceptional and diverse talent to shock and excite you.

The gallery showcases solo and group exhibitions approximately every 6 weeks by represented and guest artists. During our solo shows, space permitted, our remaining artists are also on display and rotate with each opening night. Adjacent to this space is as an extensive stockroom with more exciting artworks for private viewing.

The gallery is located in a converted warehouse tucked away in an industrial street of the same name and number – 19 Karen Avenue. It is centrally located with less than 500 meters from Pacific Fair Shopping Centre and is just behind Pacific Square in Mermaid Beach. Please see our map for directions. The gallery website is easily navigated and is updated on a daily basis, bringing you new artworks, news and information as it happens and most importantly our artists’ profiles and artworks.

"We have tango dancers at our next opening night! Cadencia Dance will be there on 31st August, entertaining the crowd at our opening night. The night kicks off at 6pm - see you there." 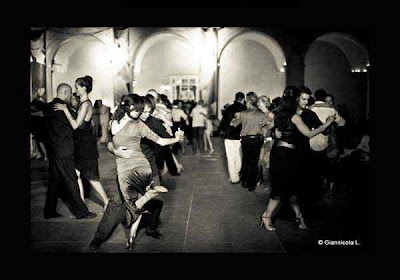 Add a glass of bubbles and we'll be in heaven.

Invest in Tango - be a part of Tango History. "Glorias del Tango" is an ambitious and exciting feature film that will end the decade-long silence of tango on the silver screen.

Kick Starter is where you will be directed to back Glorias del Tango.

Things to know about Kickstarter:

1. Kickstarter is a new way to fund creative projects.

We’re a home for everything from films, games, and music to art, design, and technology. Kickstarter is full of projects, big and small, that are brought to life through the direct support of people like you. Since our launch in 2009, more than 4.6 million people have pledged over $735 million, funding more than 46,000 creative projects. Thousands of creative projects are raising funds on Kickstarter right now.

2. Each project is independently created.

The filmmakers, musicians, artists, and designers you see on Kickstarter have complete control over and responsibility for their projects. Kickstarter is a platform and a resource; we’re not involved in the development of the projects themselves. Anyone can launch a project on Kickstarter as long as it meets our guidelines.

Project creators set a funding goal and deadline. If people like a project, they can pledge money to make it happen. Funding on Kickstarter is all-or-nothing — projects must reach their funding goals to receive any money. All-or-nothing funding might seem scary, but it’s amazingly effective in creating momentum and rallying people around an idea. To date, an impressive 44% of projects have reached their funding goals.

“ There’s just something magical about Kickstarter... You immediately feel like you’re part of a larger club of art-supporting fanatics.” — Amanda Palmer, who rallied 25,000 backers to support her album, book, and tour.

Email ThisBlogThis!Share to TwitterShare to FacebookShare to Pinterest
Labels: be a part of Tango history, invest in Tango, Kickstarter

Shared on facebook today what fun - thanks to Damian Thompson for this link.

Email ThisBlogThis!Share to TwitterShare to FacebookShare to Pinterest
Labels: One Tango Moment

We went along to Tango Y Nada Mas last night, if you haven't seen it, hurry along to Chatswood Concourse today or tonight. Loved this venue, and how lucky are we to have such talented dancers and musicians, visiting our country? For another glimpse of their performances as well as some backstage scenes here is a clip I discovered below...

OK we missed this year, but this is going on our calendar for next year, looks like a lot of fun was had by all and what a gorgeous place to visit...Summer Tango.com

Tango cruise: more than a vacation ...
The unique tango experience since 2002: a fusion of excitement and exhilarating travel. Dancing Tango on luxurious cruise ships and in unique settings

Travelling to New York to Tango?

Off to New York to Tango soon... if you know of anyone who needs dog adoring housesitters in NY do let us know! 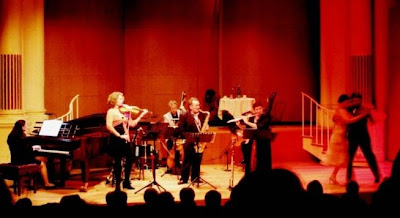 This month we are continuing our Café con Tango tour. We will be performing at Camelot Lounge on Sunday 21st - hope you can join us!

Dear friends of Alturas,
We have an exciting month of performances of Café con Tango ahead!

Starting on 21st at Sydney's favourite boutique venue, Camelot, we will perform our concert pieces in the first set, followed by a set of danceable tangos - everyone welcome on the dance floor!

We have added some new pieces to our repertoire including some originals by Jane Andino and Greg Gibson, and can't wait to perform them.

Hope to see you at Camelot! Alturas Tango

What is the Tango?

One of my favourite questions when meeting new tango dancers is to find out how they started tango... so while we are on the topic - how did you start Tango - let me know!

Email ThisBlogThis!Share to TwitterShare to FacebookShare to Pinterest
Labels: what is the tango?

Dancing on a variety of Floors 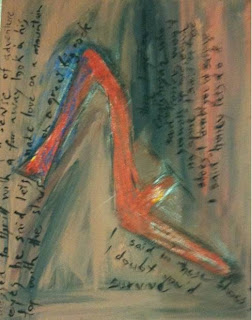 I just read an interesting article via a link on facebook - Dancing on Bad Floors (Without Killing Yourself, Your Knees, or Anyone Else).

A few years ago a friend of ours shared with us, how to use duct tape on the base of shoes to convert ordinary shoes temporarily into dance shoes - which we have used at times - with a degree of success. It's very helpful if you are dancing on surfaces where you don't want to destroy your expensive dance shoes we've found. However, duct tape is just one solution to the dilemma, and this article has so many ideas that I had never heard about before.

I have seen a pair of shoes converted with plastic milk cartons! Who'd have thought you could do that? Not me that's for sure, but they work - I'll see if I can convince this person to share his skills with a 'how to' on this blog sometime.


Art - In these shoes? I don't think so
artwork by Kareen Fellows

Email ThisBlogThis!Share to TwitterShare to FacebookShare to Pinterest
Labels: dance floors, dancing on a variety of floors, duct tape on shoes, shoes

We attended A Little Buenos Aires 13th Anniversary at The Polish Club in Ashfield last night and were treated to a performance by Analia y Luis. It was stunning - what a couple! And their daughter is just as cute as a button, she was a delight helping end the show with her little bow with her beautiful parents! This video is from a performance at Salon Canning, I'm hoping that a copy of their performance last night is listed on youtube soon, they are so beautiful to watch. We did one of their workshops yesterday and are only regretting not being able to get away to do more of their classes. If you get a chance to see their performances or to attend their classes - grab it.

Heard El violin de becho last week at the Tango Embrace practica at Collaroy, the music was so lovely to dance to and everyone was asking what the music was. As I went in search of the music I found this beautiful dance on youtube - Maria Filali and Fausto Carpino dancers.

How lucky the locals are on the Northern Beaches of Sydney - Margarita and Guy teach Argentine Tango at Collaroy, Avalon, and hold Milongas at Collaroy, Seaforth and Willoughby as well as Practicas - to find out more visit their facebook page 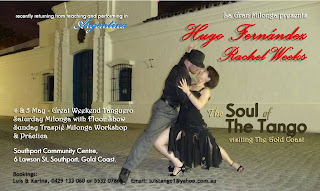 Due to public Demand, a repeat of "Milonga de los Maestros" is to be held on Saturday 4th of May at the great hall, Southport Community Centre.

A little tango in Paris anyone?

Email ThisBlogThis!Share to TwitterShare to FacebookShare to Pinterest
Labels: a little tango in Paris anyone?

Thank you Wendy for this link ♥ 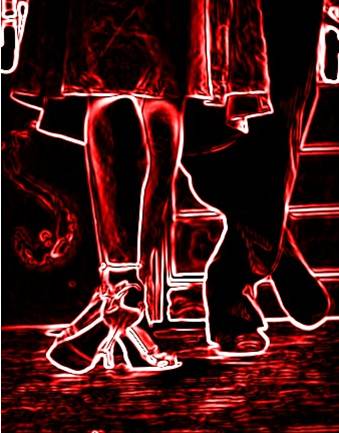